I recently came across Hans-Werner Sinn’s 13 theses on climate policy. Prof. Sinn’s main target is Germany’s policy of radical transition from fossil fuels to renewable energy sources – the famous “Energiewende”. I think some of his arguments are very well taken, others are rather dubious. In particular, I would quarrel with theses #2, #3, and #4. But at the moment it is #10 which gives me headaches.

“The [German] Renewable Energy Act, which makes green power economically viable, is completely ineffective, since it conflicts with the European emissions trading system, which already caps CO2 emissions. The green power produced in Germany not only replaces power from fossil fuels, but also sets free the corresponding emission certificates. These certificates migrate via the markets to coal-fired power stations in other EU countries, where they facilitate an increase in CO2 emissions – or a reduction in savings – which exactly matches the German savings.”

This seems to be a perfectly valid argument. Now take a look at the graph below. It shows greenhouse gas emissions relative to the base year 2005, which is the year when the EU’s emission trading system began, for Germany (blue line) and the rest of the European Union (red line). Data source: Eurostat.

What’s going on here? I can’t see any mistake in Prof. Sinn’s analysis, but his analysis seems to be completely at odds with the data. The logical conclusion is that I must be missing something. What am I missing? Help! 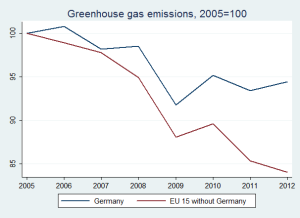 2 thoughts on “Hans-Werner Sinn’s theses on climate policy: a puzzle”