Suppose you observe different prices for the same good at different times. Why would that be? How can we explain this? In fact there are lots of possible explanations for this, but they can mostly be grouped into two categories of explanations: explanations based on changes of the demand(function) for the good and explanations based on changes of the supply(function) for the good. [Another explanation could be that there are changes in the market structure, which is a point I will get to in a later lecture.] Let me give you what I believe are good examples for the two cases. First, Styrian white wine in different years. Second, Upper Styrian hotel rooms and apartments in winter versus summer.

If I recall this correctly, Styrian white wine became quite a bit more expensive between the second half of 2016 and the beginning of 2017. In my private recollection prices (at least of the wines I was interested in) increased by something like 20%. Why? Well, in principle there could be many reasons. Perhaps, for instance, the 2015 wine (which was sold in 2016) was of better than normal quality. This would be a demand function argument. Higher quality means higher demand and, assuming the supply function stays the same, this leads to higher prices. Now suppose that you also learn (which I believe to be true here) that the amount of Styrian wine sold in the latter half of 2016 and in 2017 was actually lower than in previous years. Can the demand function explanation “explain” this as well? The answer is “no”. And all we need to see this is what we developed in the last lecture (and the one before that) about supply and demand. 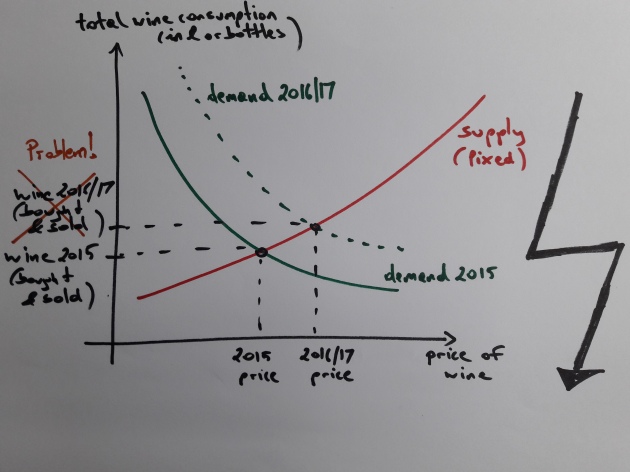 Let us start with a depiction of the pre 2016 market for Styrian white wine with price on the x-axis and number of wine bottles on the y-axis. Let us put in a somewhat arbitrary but downward sloping demand function and a somewhat arbitrary but upward sloping supply function. The equilibrium price is the price (on the x-axis) at which both functions intersect. The value on the y-axis at this intersection point is the equilibrium quantity of wine bought and sold at this equilibrium price.

Now suppose that we shift the demand function (the whole function) upwards. Because, for instance we think that the quality of wine has suddenly increased in 2016 and 2017. Let us stick with the same supply function (after all we are trying to see if a change in the demand function alone can be responsible for our observed changes in the wine price and the wine quantity bought and sold). Now suppose we get a new equilibrium with the new demand function and the old supply function. Then note that indeed we do get a higher price than before. But note also that we get a higher quantity of wine bought and sold. So this is not a good explanation of our empirically observed phenomenon.

In fact I believe that the real reason for the increase in wine prices and the decrease in bottles (bought and sold) in the second half of 2016 and in 2017 is a decrease in the supply function. In fact I believe that the supply function decreased suddenly because of the late April frost in 2016 which destroyed a fair amount of the grape harvest. Because of this, wine farmers in 2016 and 2017 (smoothing their supply immediately I believe) were not “able” or willing to supply as much as before at the same prices, simply because they didn’t have as much wine as before. Let’s see if this is a feasible explanation of our two observed phenomena of a price increase and a decrease of bottles (bought and sold). 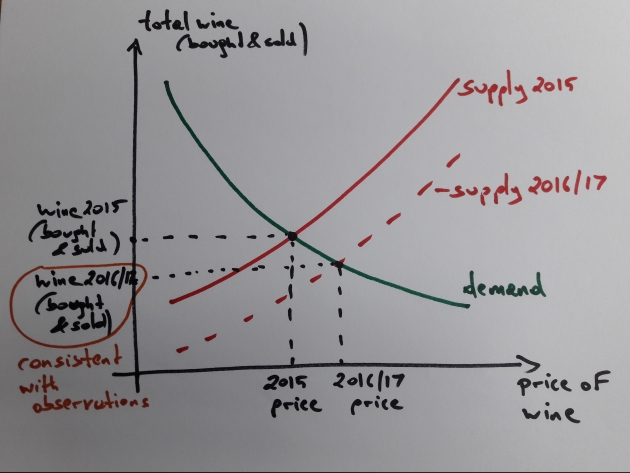 So suppose that we shift the supply function (the whole function) downwards and let us stick with the same demand function (after all we are trying to see if a change in the supply function alone can be responsible for our observed changes in the wine price and the wine quantity bought and sold). Now suppose we get a new equilibrium with the new supply function and the old demand function. Note that indeed we do get a higher price than before. And note also that we get a lower quantity of wine bought and sold. This does not mean that this is the true story, but it is a plausible story (especially when you learn about the frost) that provides theoretical implications that are consistent with the observations we made. [Another story that would also be consistent with the observations could be that Styrian wine makers in 2016 and 2017 suddenly managed to be more collusive. I do not believe this to be the case, but it could also “explain” the increase in prices and the reduction in wine bought and sold.]

This was an example of a price change quite possibly because of a change in the supply function. 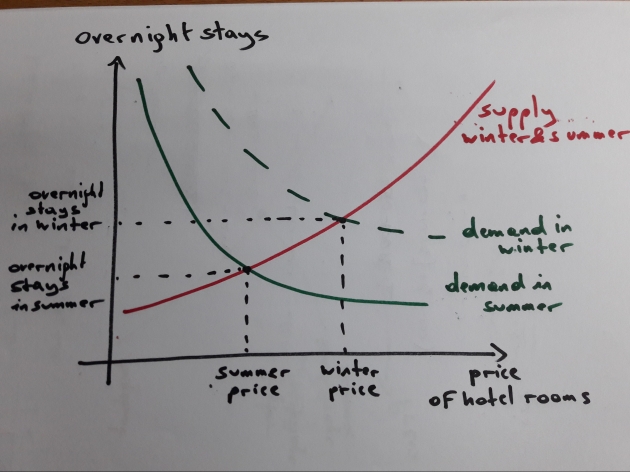 So this is an example of a price difference that is quite possibly driven by a difference in demand.

2 thoughts on “Intro to Econ: Sixth Lecture – What is driving changes in prices?”